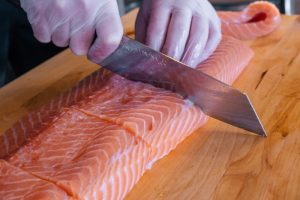 Having run fast-casual franchises in the Central Florida area for over a decade, Galicia started working in restaurants while in college, but didn’t really get proper training anywhere.

“I learned as I went,” Galicia admits. “I decided to purchase my first franchise in 2011 with a nationwide brand that helped me learn a lot on how to be a successful owner/operator. Then I decided to branch out to a smaller franchise concept. I was their first franchisee and learned what it was like to start up a business from the ground up.”

Now, alongside his wife and co-owner Diana, Bruce is bringing his latest fast casual franchise, LemonShark Poké, to Marketplace at Avalon Park.

“Our food is delicious,” Diana exclaims. “Bruce and I are passionate about LemonShark Poké. We love seeing our customers happy.”

While the Galicias originally came to Marketplace at Avalon to lease a parcel for their poké restaurant, an opportunity presented itself that was too good to pass up.

“(The) leasing rep expressed the need for a dessert concept in the Marketplace. I was up for the challenge and decided to create a dessert spot that featured homemade ice cream.”

Located in the Marketplace at Avalon Park food hall, both LemonShark Poké and Sip ‘n Roll Creamery offer a little something to satisfy every appetite.