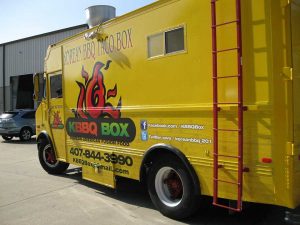 After years on the road as one of Orlando’s most popular mobile food hotspots, KBBQ is parking their food truck and opening a brick-and-mortar kitchen at Marketplace at Avalon Park.

KBBQ began in 2011 as Korean BBQ Taco Box, one of Orlando’s first food trucks. A beloved and successful venture from the start, KBBQ has been awarded with the following accolades over the years:

A family-owned and operated business, KBBQ was run as a food truck for eight years by 20-year Orlando residents from South Korea. Their goal was to pick the most popular South Korean menu items and bring them to the Greater Orlando area. Now they are serving their delicious meals exclusively to hungry visitors at their Avalon Park kitchen.

“We are excited to park our wheels, change our business from a food truck to a restaurant and continue our journey with a permanent location in Marketplace at Avalon Park!”

Located in the Marketplace at Avalon Park food hall, KBBQ Kitchen serves mouth-watering American Korean fusion food that will have you coming back for more.